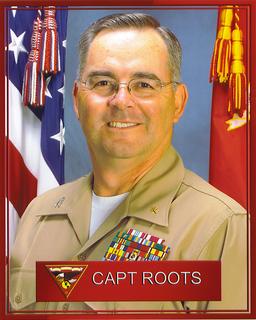 If I heard this once, I heard it a dozen times during my time in New Orleans last week.

I was visiting the Marines who are part of the 4th MAW (Marine Aircraft Wing) currently headquartered in Marietta, Georgia. These reservists are spread out between Marietta and New Orleans, all trying to assist those who have been displaced by Hurricane Katrina.

At the start of the week, everyone was acutely aware of the growing threat on the horizon imposed by Hurricane Rita. Everyone was paying attention to the weather developments in the Gulf of Mexico wondering if Rita was going to run right up behind Katrina. Hurricanes were no longer just a threat to Florida and the Keys, or the Caribbean Islands.

I flew to Naval Air Station Joint Reserve Base New Orleans on Monday to check on our 4th MAW Marines and found in them what I expected. They were helping assist those who were in more dire need than themselves. I also made contact with a number of chaplains not only with the Navy, but the Army, Air Force, the National and Air National Guard, all coordinating efforts to help those less fortunate. On Wednesday I was asked to spend the day at the largest FEMA Disaster Relief Center. They specifically wanted a military chaplain in uniform (camouflage utilities is what I was wearing) to be present. It seems that some of the people they were trying to process for assistance were so emotionally overwrought that they would break down in tears.

The FEMA folks were located in a Bingo Hall in the town of Boutte, Saint Charles Parrish, about fifteen miles from New Orleans. When I arrived I saw a long line of people standing patiently under a canopied walkway, waiting to be allowed inside where they would be seen by one of a number of agencies. FEMA, Red Cross, the phone company, something called Blue Tarp, and the Small Businessmen’s Association were all on hand and had been since the storm hit. I hadn’t heard that through the news media.

So, sizing up the situation, I began to look after the workers first, since many of them had lost everything as well. Here they were helping others. One young lady worked tirelessly, always with a big smile. I learned she was what we call a “military brat.” That is to say, her dad (or mom) was active duty military while she was growing up. Though her apartment survived the ravages of Hurricane Katrina, looters got in before she was able to retrieve her stuff. They wiped her out. To watch her, knowing what I now knew, was inspirational.

Another man, perhaps late 60s, came in, saw me and said, “You’re a chaplain?” I assured him that I was. He then made this most unusual pronouncement: “Hurricane Katrina is the best thing that ever happened to me!” I said, “Really!” waiting for an explanation that I knew he was going to provide. He said, “You see, my wife and I had to leave New Orleans because of Katrina. Our home is now gone. We hadn’t been to church in thirty years. Never had time for God. I was always too busy. As a result, we went back to church, rededicated our lives to Jesus Christ, and were baptized. Now I’m at peace even though all our stuff is gone. Praise the Lord!” Then he hugged me. The peace on his face was evidence enough of a changed heart.

I started thinking about Jesus’ words in Matthew 6:19-21, “Do not store up for yourselves treasures on earth, where moth and rust destroy, and where thieves break in and steal. But store up for yourselves treasures in heaven where moth and rust do not destroy, and where thieves do not break in and steal. For where your treasure is, there will your heart be also.”

So many people in Louisiana, Mississippi, Alabama, and now Texas, have had all their earthly possessions destroyed, or stolen, that they’ve learned life is far more precious than the stuff we acquire. It’s all about relationships – specifically, family. And above all, God.

I have often shared with people this truth: You never see a u-haul truck following behind a hearse. It’s just stuff, and you won’t be taking it with you.

Where are you storing your treasure?
Posted by CHUCK ROOTS at 18:01