Out of the Blue

Recently, I had an angelic visitation. Well, not exactly, but it sounds good and it works for this article.

A news crew from Channel 31 out of Sacramento decided to pay a surprise visit to my town of Ripon. Driving to work one morning I discovered a television news truck parked on Main Street in front of the church. The news crew had heard that the church was the oldest church in town and they thought they’d stop by. While I was standing out front chatting with the news guys, a car pulled up to the curb right where we were standing. All conversation came to a halt as we each in turn made an approving appraisal of the coolest looking Corvette any of us had ever seen.

By way of background, I grew up during the hay-day of car shows in the ‘50s. My dad used to take us to see the sorts of futuristic cars that might one day be on the road. They all looked “other-worldly,” but it was always great fun. Besides that, my dad had a number of memorable automobiles over the years. Several that come to mind were: 1) a 1937 Cord with front-wheel drive, a feature well ahead of its time, 2) a 1941 Lincoln Continental with the metal-covered spare tire centered on the rear bumper, and 3) a 1948 Studebaker bullet-nose. That was the car design which left you wondering which end of the car was the front and which was the back!

So, emerging from this tangible symbol of Detroit’s most successful effort at combining brawn and beauty were Dave and Jennifer Raymond, the owners of this marvelous American icon. They, too, had hoped to catch up with the news team.

You may be wondering what was it that made this ‘Vette so different from all the others on the road? Simple: It was painted to look just like the Navy Blue Angels performance jets. I kid you not! The car was painted all blue, trimmed in the simple gold cursive writing, Blue Angels, on each door. Being that I am forever and always a lover of cars, I began to fire off questions at Dave and Jennifer. What year is the car? 2005. I’ll bet you can drive onto any military base in the country? Not really. Did you need permission from the Blue Angels to paint the car this way? No. And so the questioning went.

The car was totally customized right down to the seat covers. And, get this - they played a recording of the Blue Angels pilots in flight during a performance. Now that was cool!

Several people had gathered around by this time, which wasn’t hard to do in a town where all the action is on Main Street anyway. My secretary, Gayle Mottweiler, came out of her office wondering what I was up to this time. One of the ladies in our church, Carol Anderson, had stopped by the church. She and Gayle were “Tsk, tsking” over my obvious lack of decorum in the presence of so elegant a machine. And to do so right there in front of the church even! I carry a handkerchief just for such unexpected occasions.

Dave Kelch had come by the church to take care of our routine janitorial service. We’re pals when it comes to cars because we each own a Chrysler PT Cruiser. He was standing there with a grin on his face looking at that ‘Vette like he’d just eaten the canary!

The manager of the Bank of Stockton next door, Nancy Caldwell, came out with her camera. All I had was my cell phone camera – which is good in a pinch, but would never do for something this momentous.

I admit it. I looked pathetic, fairly drooling over this car. It had been meticulously customized down to the detail in the engine so as to totally reflect the Blue Angels image. Dave Raymond is a gracious man and asked me if I’d like to sit in the car. He didn’t have to ask me twice. This particular ‘Vette has a six-speed manual transmission. When I asked Dave about this, he said it cruises at 80 mph – no problem. And he’s not even close to getting into sixth gear. Whoa! 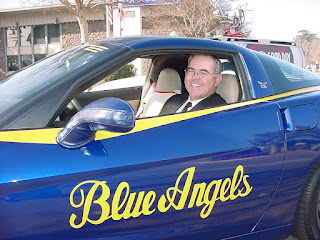 In the last couple of years, I’ve been asked to be a judge for the car show in Ripon during our Annual Main Street Days in October. Not only do I get to see some of the finest looking hot rods and other show cars, but I get to pick the one I like best! It’s tough duty, but somebody has to do it.

When my nephew, Josh Roots, graduated from the Naval Academy in 1998, we were able to attend the graduation held on the school grounds of Annapolis, Maryland. Among the many memorable events of graduation week was a private performance by the Blue Angels for the graduates and their family’s right there over the Severn River. It was awesome!

Now, I’ve read about angels in the Bible, and they are really something special. Abraham had his encounters with angels, as did Joseph and Mary, and did various others, including the shepherds the night Jesus was born. But none of them had an angel appear out of the blue with a 400 horse power, rear wheel drive, multi-point fuel-injected, 6 Liter “I’m gonna eat your lunch!” V 8 engine!

You had to have been there!
Posted by CHUCK ROOTS at 17:02