Occasionally life allows you to witness certain special events. I was privy to just such an event this past week.

There is a couple in my church that is celebrating their 70th wedding anniversary this month. Ervan and Pearline Frisk are what you call “salt of the earth.” It has been my privilege to be their pastor now for the past seven years or so. 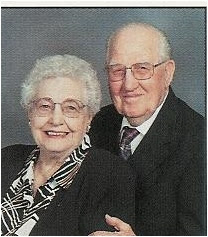 There are a number of remarkable things about this couple that bear mentioning. They are actively involved in the life of our congregation. Erv has been working with our worship team, frequently leading worship for our early Sunday morning service. He and Pearline also provide ministry to our Junior Jammers on Wednesday nights. What are Junior Jammers, you ask? Those are the kids who are in fourth to sixth grade. That’s the age range from 9-11. This is also one of the toughest ages to work with. Not because the kids are bad, or misbehave, so much as they are full of energy. I get tired simply watching them! Erv is a farmer from way back and is always tinkering with something in his workshop. He makes wooden train sets, cars or whatever, and then shows the kids how to assemble them. I sure would have come to church for that when I was that age! On Sunday mornings, Erv and Pearline can be found in the youth room cooking up pancakes for the kids, many of who come from broken/dysfunctional homes. They also live in Linden, which is about a forty-five minute drive from Ripon. Now that’s commitment! On Sunday, October 14th, our church hosted a potluck in their honor. A bunch of the Junior Jammers presented them with a huge card with signed pictures from all the kids. Erv loves to tell stories and quote poems. He’s always got a joke to tell. And the amazing thing is that Pearline still laughs at his jokes!

On October 6th, the Frisk family had a big party for Erv and Pearline. Isaura and I were honored to be invited. It was wonderful to see how the family paid tribute to these loved ones. Children, grandchildren, great grandchildren, and great great grandchildren. Kin traveled from Texas, Arkansas and Alaska to mention a few. My wife asked Erv what the secret was to their long marriage. He quipped, “Well, you have to live long enough.” That’s Erv!

At the start of World War Two Erv and Pearline were farming in the Central Valley area of California. With the nation at war, Erv didn’t have a second thought to signing up. He enlisted in the Army and spent the next four years in service to Uncle Sam so you and I could live in a free country. Pearline was left with two kids and a farm to tend, not to mention fifteen cows that needed milking every day. After the war was over life settled down for them and they added three more kids to the brood.

Five years ago when I was brought back on active duty for Operation Iraqi Freedom, none of us knew just how long I was going to be gone. Isaura took courage from Pearline, remembering that she had had it much worse. At least Isaura had two grown children, and no cows to milk!

When they married, Erv was nineteen and Pearline was sixteen. Her folks weren’t real thrilled with her interest in Erv, so these two decided to sneak down to the City Hall and register to be married. They figured they could go ahead and secretly get married by a local preacher before any of the family found out. There was one problem: Newspapers were run daily, so the information was fed to the paper that day, and Pearline’s brother saw the announcement that same afternoon. But by that time the couple had already stood before a Free Methodist minister and said their “I dos.”

In Erv’s unique style of humor, he often understates things. I’ll ask him on a Sunday morning during our greeting time, “How you doing, old paint?” (Don’t ask me where I came up with that expression!) Erv will give me a forlorn look, and say, “Suffering. Just suffering.” Of course, Pearline is right beside him just smiling away.

When we have our church potluck suppers, you can bet Pearline is right in there helping get everything ready, and then staying after to help clean up.

I asked Erv about the differences in their personalities. His response was, “Well, she was wild, and I was crazy.” He followed that up with a story describing Pearline’s penchant for speed. He said she loved to race cars. The only trouble was she liked to race the family car! And the one story that has always intrigued me is Pearline riding a Harley-Davidson motorcycle. I look at this lady who always has her hair done, and cheers you with a beautiful smile, the epitome of a grandmother, and my brain short-circuits picturing her roaring down some back road on a Harley! Erv had an explosive temper in his younger years.