There has been a lot of rancor over the improper recognition of Christmas in recent years. I’ve watched all of this while attempting to not allow others to define the reason we celebrate the birth of Jesus.

On my way to the church office today, I saw a man standing on the freeway overpass holding a large festive sign that read, “Happy Birthday Jesus! Thanks for Your Forgiveness.” I smiled and waved to him as I pulled away from the stop sign. I have no idea how long he stood out there with his hand made sign, but he was conveying the simple message of Christmas and why we celebrate it.

I’m not one of those who get upset because employees of department stores and local businesses may be told they are not to say “Merry Christmas” to their customers. I can usually tell when some hapless clerk is saying “Happy Holidays,” when they really want to say “Merry Christmas.” Listen! They work there. There are always things we are asked to do in whatever job you have that may not be entirely to your liking. And in today’s economy having and keeping a job has become pretty important.

Think about it. If the owners of a particular business do not want their employees to engage in personalized greetings for Christmas, that’s their option. They may also be atheists, or believe in the tenets of another religion, or have some personal angst with Christians, etc. I have some options too. One of those is I don’t have to shop there. That is not an option I have ever chosen to use. Why? Because it doesn’t accomplish anything, except perhaps to offer some sort of silly, surreptitious sensation that “I showed them!”

Instead, as a Christian, as a believer in of Jesus Christ and his sacrificial, atoning death on the cross for my sins, I believe my attitude should be to shop in the store regardless of whether they greet me with Merry Christmas or not. I, on the other hand, am perfectly at liberty to express my beliefs openly by saying “Merry Christmas” to whomever I choose. Often in these store situations I will say Merry Christmas to a frazzled, overworked employee, only to have them momentarily pause, glance up from their task, and with a look of surprise mixed with a bit of mischief, they’ll look me in the eye and say “Merry Christmas.” It’s like I’ve engaged in doing something naughty with them and we got away with it. I can tell it lifted their spirits, and I walk out with a smile on my face.

Another one of those Christmas Season issues in recent years has been the displaying of a crèche on the town square, or somewhere centrally located in the community. This manger scene is another example of the Christian faith and its strong early influences on our nation. Sadly, we have moved a long way from those influences, even in the sixty-one years I’ve been on planet Earth. Even as a kid, I really had no idea what all that manger scene stuff was about, other than it looked cool for a few weeks in December. Maybe your town doesn’t have a manger scene or an official tree-lighting any longer. Okay. Here’s what you can do. Set up your own manger scene in front of your house, and decorate a Christmas tree somewhere in the yard festooned with lights and any other items that please you. Then encourage your friends and neighbors to do the same thing. Christmas decorating in neighborhoods has become a big deal in several places we’ve lived over the years. In Fresno, California where we lived in the early 80s, they have a stretch of homes in an exclusive part of town that goes all out at Christmas. Night after night throughout the season, cars cruise along “Christmas Tree Lane” oohing and ahhing at the spectacular displays on and around the homes of these upscale homes. It is one of the “things to do” when you live in that city. 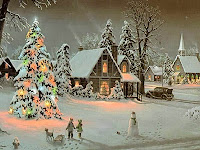 When we lived in Turlock, California in the mid-90s, we discovered a neighborhood only a few blocks from the church where I was serving at the time that decorated each year what is called, “Candy Cane Lane.” With headlights off, cars poke along this two block area with faces peering out at the Christmas displays, enjoying the amazing creativity some folks have. Others park and stroll along the street simply taking in the beauty of the scene. It was magical!

One last thought. As a Christian, I want everyone to take pleasure in the joy of Christmas. I want them to know this Jesus who was born to die for their sins. But more importantly than whether a store employee says Merry Christmas, or manger scenes are authorized, is the attitude you display to others. They are far more likely to be drawn to the beauty of Christ when you demonstrate his love in both your attitude and your actions than if they see another crèche, or are greeted with Merry Christmas. Think about it.

And have a Merry Christmas!