I just could not pass up the opportunity to recognize two special days in the year. Most people are familiar with one, but not the other.
November 11th is, of course, Veterans Day and has been since the end of World War I. Originally it was known as Armistice Day announcing the end of World War I, but was later changed to Veterans Day following World War II. This is a day when we recognize and honor those who have served in the military throughout our nation’s history, both living and dead. Folks often confuse Veterans Day with Memorial Day. As the word “Memorial” implies (in memory), Memorial Day (Originally Decoration Day) is a time when we honor those who have died while serving in the military in the defense of our nation.
﻿﻿ 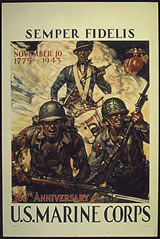 So, besides Veterans Day, there’s a second day: November 10th, the birthday of the United States Marine Corps. Granted, this may only seem to have importance to Marines and their loved ones, but wait! Though other branches of the military have birthday dates, and they are earlier than the Corps by a matter of months, the history and traditions of the Marine Corps are part and parcel of the legacy that surrounds the Marine Corps. There is not a Marine alive today who does not know that November 10 is the birthday of the Corps! Ask ten people who have served in the Army or Navy what the birthday of their service is, and I would venture to guess that, at best, three of 10 might know. Now ask ten Marines the same question and you will have ten out of ten say November 10.
﻿ ﻿
As things often align in life, Ramon Vasquez, the young man I wrote about a couple of months back, graduated from Marine Corps boot camp on October 29th, meritoriously promoted to Private First Class (PFC). He then came home for ten days. My, how proud our church family is of this young man! So the other day his step father, Tony Boyce, asked me if I’d join them in a round of golf. I suggested we have a fourth join us. So I called my friend, Bill Singleterry. I was particularly anxious to have Ramon meet Bill because Bill is a former Marine who saw a lot of action during World War II. Marines know their history, and particularly the history of the Corps. With so many of our WWII veterans leaving us, I thought it would be a wonderful opportunity for Ramon to personally interact with a man who served during a period of time when the legacy of the Marine Corps was being reestablished as a premier amphibious fighting force. So, this morning we four met and had a wonderful time playing golf, but more importantly, Ramon got to spend time with Bill. Later, we enjoyed lunch together, delving into Bill’s Marine Corps experiences.
﻿﻿ 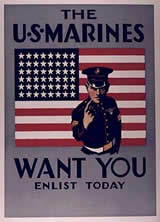 At age 17, Bill convinced his dad to sign for him to enlist in the Marine Corps two weeks after graduating from high school. When asked why he signed up for the Marines, Bill gave a one-word answer: Patriotism. Leaving his home in Joplin, Missouri, Bill traveled to San Diego by train where he went to boot camp. Before the year was out, and right after his eighteenth birthday, he was thrust into the first offensive action in the Pacific. The Battle of Tarawa, November 20-23, was an amphibious landing of the 2nd Marine Division on the Tarawa Atoll, defended by 5,000 well trained and well-entrenched Japanese soldiers. Bill writes in his memoires, Transition: Boy to Man, “The 2nd Marine Division was taking the island, and we were designated as replacements. If everything goes well, they won’t even need us.” The Marines ran into a buzz saw! “The defenders were the Japanese counterpart of the U.S. Marines. They had dug in deep and the pre-invasion bombardment had hardly made a dent in the defensive positions. Later that day they told us to prepare for landing the next morning. We knew things were tough ashore. Otherwise, why would they need a replacement battalion?”
﻿﻿
The next morning Bill was on a Higgins boat heading for shore. “We roared toward the beach. We had our heads down to keep from getting hit so we couldn’t see how close we were getting. The boat hit the reef and came to a sudden halt. The door dropped down and I received my first 'baptism of fire.' All during training you wonder how you will react when the real thing comes along. The first thing I thought about was doing everything I could to stay alive.” Bill goes on to tell what happened after they jumped into the water. “With all the equipment you had on it would be very easy to drown if you hit a hole, and some did. We were still 200 yards from the beach and machine gun fire was coming in hot and heavy. I wondered if my rifle would fire if I ever got to shore.”
After Tarawa, Bill’s unit participated in the Battle for Saipan, then Tinian, and finally Okinawa. He was back in Saipan preparing to be part of the huge invasion force that would attack mainland Japan, had President Truman not decided to drop the atomic bomb on Hiroshima and Nagasaki. Conservative estimates say that some 1.5 to 2 million American lives were spared by dropping the bomb.
﻿﻿
In the Prologue of his memoires, Bill explains his reason for writing about his war experiences. “I wrote this because I want my children, my grandchildren, my great grandchildren and all the family that comes along after I’m gone to understand that the freedoms that they enjoy did not come cheaply. I want them to understand that many hardships were endured and much blood was shed to buy those freedoms. I want them to understand the privileges that too many Americans take for granted, could have been lost forever.”
On November 10th, Marines raise a glass to men like Bill Singleterry. On November 11th, the rest of the nation honors all who have served our nation.
Remember: Freedom and liberty come at a high price!
﻿﻿ 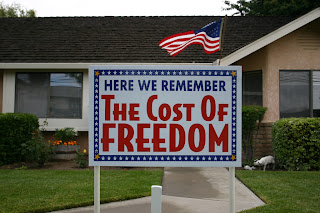