About this time last year those of us who are board members of the Ripon Arts League (RAL) agreed that a new piano was definitely needed for future RAL performances, and was, in fact, long overdue. The piano we’ve had for the past thirty-odd years (and showed it!) was in fact built in 1921. It had served us well. However, when our piano tuner said he no longer wished to tune the old gal because the pegs and tuning board were simply worn out, we knew we had to take action.
We put out the word to our RAL members that we were going to actively raise money for a new piano. We selected a brand new Yamaha Baby Grand (5 feet in length). The cost was a hefty eighteen grand. We gave ourselves a year to garner the funds. However, within less than six months we had raised twelve thousand. Shortly after, an anonymous donner presented us with a check for six thousand to complete the amount needed. 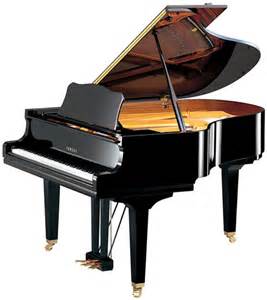 Wishing to express our thanks to those individuals who helped us reach our goal so quickly, we decided to have a “piano dedication.” We arranged for a private performance for anyone who had contributed toward the piano, whether it was $5.00, or $6,000.00. So we held the performance recently on a Sunday afternoon in the same facility we host our five yearly concerts – the Ripon High School multi-purpose room. Round tables and chairs were set out for the 150 or so guests. Each table had a covering, with a center piece displaying a piano motif. Cake and coffee was made available at the end of the concert. But it was the concert that was absolutely riveting.
This Sunday afternoon two-hour soiree began with the Gottschalks Music Center Concert Band of 35 members under the direction of Mr. Matt Cover performing the first half of the program. After a brief intermission, the second half highlighted the new midnight black Yamaha Baby Grand. Our guest pianist was Dr. John H. Hillebrandt who has been performing with the Modesto Symphony for many years, delighting audiences in over 500 performances.
Backed by the Gottschalk’s Concert Band, John launched into the classic George Gershwin, “Rhapsody in Blue.” This amazing musical piece certainly features the piano, allowing the pianist to put the 88 keys through their paces. The ebb and flow of the music fairly carries the listener to another realm in a wave of symphonic ecstasy. At the climatic conclusion the audience roared their approval punctuated by a standing ovation.
Folks stood around afterward with cake-on-a-plate and coffee discussing the veritable revelry of having heard not simply a new piano being dedicated, but a masterful performance by a masterful pianist. After all the band instruments were returned to their cases, and the new Yamaha Baby Grand was covered and secured in the adjoining room off stage, the shared feeling by those in attendance was that no one wanted the afternoon to end. 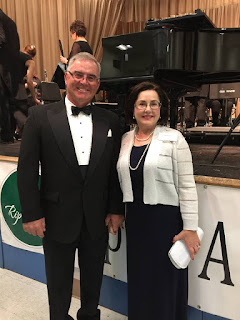 Since the president of the RAL, Kit Oase, was out of town, I, as vice president of the RAL, was asked to be the emcee for this event. Well, even though I grew up hearing my mother play almost daily on her “Living Room” Grand Piano, in thinking about it, I realized I knew next to nothing about pianos and their history. So, I put on my researchers hat (figuratively speaking) and had oodles of fun discovering interesting trivia about the piano.
I learned that the first piano made was in Padua, Italy in 1700 by Bartolomeo Cristofori. In fact, the first name for the piano was “un cimbalo di cipresso di piano e forte,” when translated, means, “a keyboard of cypress with loud and soft.” It was later shortened to pianoforte, or fortepiano, and then simply, piano. The last part of this article will be a description of exactly what produces the sound when a key is pressed on a piano. Though not written originally to be humorous, I found myself laughing out loud when I read it. Even with my fairly extensive musical background I had no idea what the writer of this piece was trying to say. I shared it with our audience, many of whom are very musically astute. As I read it, folks began chuckling to the point that when I finished, the audience was laughing out loud. Here it is:
“When the key is struck, a chain reaction occurs to produce the sound. First, the key raises the wippen, which forces the jack against the hammer roller (or knuckle). The hammer roller then lifts the lever carrying the hammer. The key also raises the damper; and immediately after the hammer strikes the wire it falls back, allowing the wire to resonate. When the key is released the damper falls back onto the strings, stopping the wire from vibrating. The vibrating piano strings themselves are not very loud, but their vibrations are transmitted to a large soundboard that moves air and thus converts the energy to sound. The irregular shape and off-center placement of the bridge ensure that the soundboard vibrates strongly at all frequencies.”
I wish you could have joined us. It was a memorable evening.