I continue to pinch myself about my recent travels to the Holy Land. In the eight days spent traversing the entire country of Israel, I reached overload attempting to absorb it all. I took a lot of pictures and am even now in the process of sorting them out. That’s easier with a digital camera where all you need to do is hook the camera (or chip) to the computer and download all your pictures. I did this daily while I was in Israel, accumulating more than one thousand photos. I’ll be busy for a while!

Jerusalem is an amazing city. It is quite modern, replete with rush hour traffic that rivals anything we have in New York or Los Angeles. My traveling partner, Bob Geer, and I will be sharing our pictures and videos from the trip at 6:00 pm on Sunday, April 1 at the Ripon Free Methodist Church. We are calling it, “The Odd Couples’ Tour.” This identifier came about because Bob and I were the only ones from our church, whereas the rest of the 25 members in our tour group were pretty much evenly split between a Baptist Church from San Luis Obispo, California, and a Free Methodist Church from Kidron, Ohio. They all decided Bob and I would be called the “Odd Couple.” It fits, too. Bob and I are quite dissimilar in appearance. I am now 68” tall, a recent revelation after having a physical in February. I used to be 70” tall (that’s 5’10”). Bob is 6’2”. As I get older I feel like the Wicked Witch of the West from the Wizard of Oz, crying, “I’m melting!”

As we approached the outskirts of Jerusalem, Nola, our tour guide, had a CD ready to play “Jerusalem.” It is a wonderfully moving song, and brought tears to my eyes. We arrived in the middle of the afternoon on Friday, March 17. The Jewish Sabbath begins at sundown so all we had time to do was take pictures of the city from across the Kidron Valley looking at the Holy City. Once the Sabbath officially starts you will find nary a vehicle on the street. Dinner for the evening was prepared ahead of time so no one would have to work after sundown. But to stand there and see this glorious city is simply breathtaking.

We spent most of the last three days of our tour in Jerusalem. During one of those days we traveled to the Masada fortress where the Jewish Zealots sought refuge from the encroachment of the Roman government during the later part of the first century. 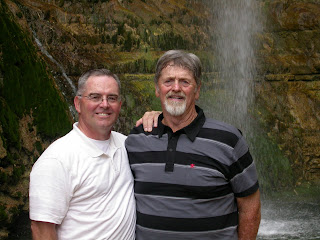 Then we went to Qumran where Jewish Essenes removed themselves from daily life to study, preserve and copy Scripture. It is here where the Dead Sea Scrolls (or Qumran Scrolls) were discovered about sixty years ago. We also visited En Gedi, a natural oasis where David often spent time hiding from King Saul. Here you find beautiful springs and water falls in the barren hills alongside the Dead Sea. To end the day, we stopped by the Dead Sea for a dip. It really is true: You cannot sink in the waters of the Dead Sea because of the enormous salt and mineral content. 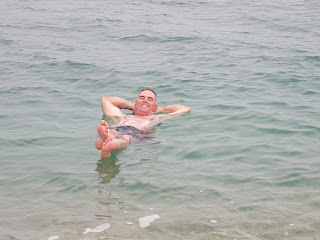 I found myself giggling as Bob and I floated effortlessly in the water. 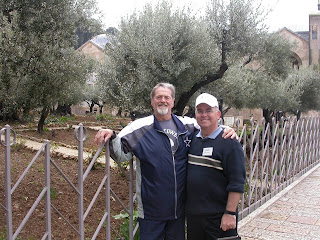 But it was Jerusalem that embodies the history and heart of the people, and where as a Christian, I could envision Jesus walking through the streets, praying in the Garden of Gethsemane, and eating olives from the many trees that still grow along the hillsides. It was Solomon who said of Jerusalem nearly three thousand years ago: “You are beautiful, my darling, lovely as Jerusalem.” He was right then, and he would be right today.

We visited what used to be called the “Wailing Wall,” but today is referred to as the “Western Wall.” On the day we were there, it was the beginning of a new moon. 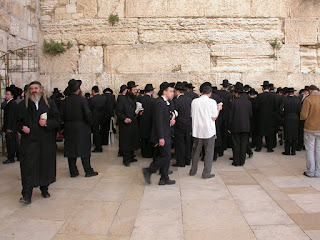 There was a large number of Hasidic Jews at the Wall standing about five deep. By definition, Hasidism is a sect of Judaism founded in Poland in the 1700s by Israel Baal Shem-Tov. It is characterized by its emphasis on mysticism, prayer, religious zeal, and joy. The name comes from the Hebrew word for pious. Traditionally you can pick out the Hasidic Jews by the black suit and black broad-brimmed hat. Many will stand at the Wall and pray, rocking back and forth in rhythmic fashion. 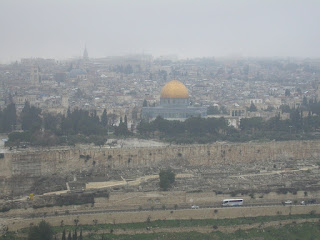 There is, of course, the Al Aqsa mosque with its golden dome which always stands out in any photo. This whole area is considered quite sacred to the three major theistic religions of the world: Judaism, Christianity and Islam. Within the ancient walls of Jerusalem the city is divided into quarters.

What was of significance to me personally was our visit to the traditional burial plot for Jesus. The location is outside the ancient city walls and not far from the Garden of Gethsemane. Once inside the area of the Garden Tomb, Nola introduced us to a delightful man who would take us through and give us the history behind this site. Ken is a classic Englishman with white hair and a beard, elflike in stature, and with eyes that literally crackled with excitement. He looked like a character right out of Central Casting in Hollywood, and would have fit right into C.S. Lewis’, “The Chronicles of Narnia.”

Ken regaled us with the history and traditions surrounding the possible burial sites for Jesus. 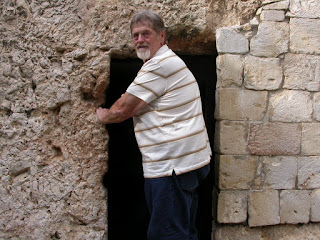 It cannot be known for certain exactly which tomb Jesus was laid in, but there is one thing I can assure you: Whichever tomb he was laid in, he’s not there any longer! As the sign said on the door which led into the tomb: “He is not here. He is risen!” 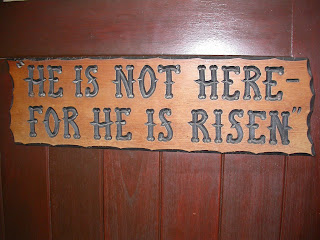 Hallelujah! Amen! Have a great Easter!
Posted by CHUCK ROOTS at 15:39