It was 4:00 am on Sunday morning when I picked up Bob Geer. We two happy wanderers were about to begin the journey of a lifetime. With his suitcases safely tucked in the back of my car, we started down the road for Jerry & Gayle Mottweiler’s. They had offered to drive us to the Sacramento airport, thus avoiding the hassle of leaving my car in long term parking for eleven days.

No sooner had I pulled away from Bob’s house than the oldies radio station I had on played Ricky Nelson’s 1950’s classic, Travelin’ Man. It was a serendipitous moment!

In any event, we caught our early morning flight to Chicago’s O’Hare where we made our connecting flight on British Airways to London’s Heathrow. 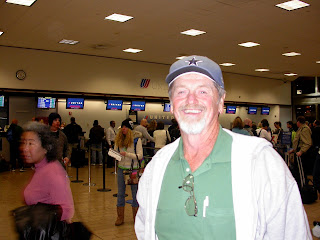 After a six hour layover and a two hour delay we finally caught our flight to the Ben Gurion airport in Tel Aviv, Israel. With the time changes and length of travel, we were happy to finally be at our destination. One slight problem – our luggage did not make the transfer in London. Thankfully, it did catch up with us the following evening.

Admittedly, the idea of traveling to the Holy Land had never been a particular desire of mine. That’s not to say that if the opportunity had presented itself I wouldn’t have gone. I surely would have. But only in recent years did I begin to have a desire to walk where Jesus walked. I can’t fully explain this, other than to say it was a longing that would not go away. It certainly had nothing to do with wanting to travel – I’ve done more than my share of that throughout my life! I guess by way of explanation I’d have to say that I simply wanted to look upon the hills that surrounded Nazareth, ride on the shimmering waters of the Sea of Galilee, and enter the Holy City of Jerusalem where my Lord had his final showdown with the religious establishment of the day.

Okay, back to our arrival in Tel Aviv. After a night’s rest in the Grand Beach Hotel we headed for the ancient city of Caesarea. This was a city built by King Herod the Great who was king at the time of Jesus’ birth. 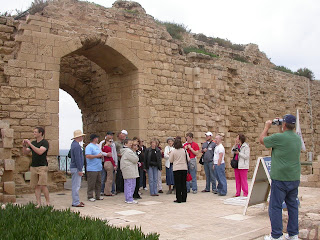 About forty years earlier Herod had this city built in honor of the current Roman emperor, Caesar Augustus. Though very little remains, you can still see the foundations. It was here that the Apostle Paul would have journeyed to Rome.

Next stop was Mount Carmel, or Karmi-el, meaning “Vineyard of God.” It was here that the prophet Elijah had his famous confrontation with the prophets of Baal. Then we stopped atop Megiddo where we could look down on the Valley of Jezreel, the site for the future apocalyptic Battle of Armageddon.

We then rolled in to Nazareth, hometown of Jesus. This began a journey over the next several days which allowed us to see, hear, smell, taste, and feel what Jesus would have experienced. We saw the location of Jesus’ first miracle in Cana when he turned water into wine at the wedding feast.

Being somewhat of an emotional person, I found myself overwhelmed on the third day 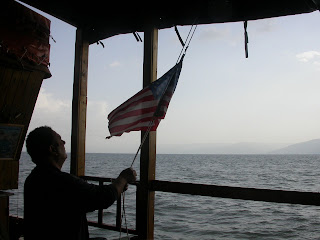 during our boat ride up to Capernaum. It began with the boat captain ceremonially raising a small American flag and singing OUR national anthem. We all joined in with gusto! It was a wonderful touch. 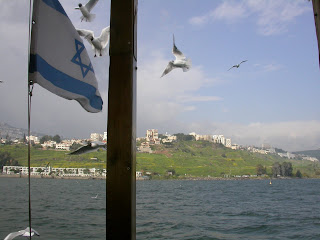 A short time later I was reflecting on passages of Scripture where Jesus walked on the water. Or the story of Jesus asleep in the bow of the boat when a horrific storm came up and threatened to drown all on board. Jesus simply said, “Peace, be still!” and the storm was quieted, just like that! Or the visit to the ruins of the synagogue in Capernaum where Jesus was handed the scrolls of Isaiah where he read prophecies about himself. Or the site where Jesus multiplied the loaves and fishes. Or the location where he gave the Sermon on the Mount.

Now add to this the realization that I was actually here in the Holy Land, and before I could do anything about it I had tears running down my cheeks. The old gospel song came to mind, “I Walked Today Where Jesus Walked.” 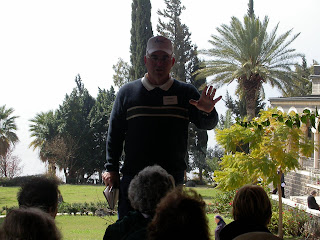 At the site where Jesus gave the Sermon on the Mount I had been asked to share with our group of twenty-seven. I spoke of the wonderful simplicity, yet profound teaching of the Sermon on the Mount. I finished by pointing out that we’d just passed through the area of the Gadara. This is where Jesus was confronted by the man who was demon possessed. Jesus cast the demon, called Legion, out of the man and into the herd of swine. The swine were driven mad, rushing off the cliff nearby and into the Sea of Galilee where they all drowned. I mentioned how before I gave my life to Christ as a twenty-four year old sergeant in the Marine Corps, I was just as far from God as this demon possessed man had been. But then I met Jesus, just like he did.

Before beginning our journey south to Jerusalem, we visited Caesarea Phillipi where 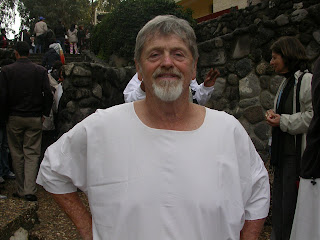 Peter declared to Jesus, “You are the Christ, the Son of the Living God!” 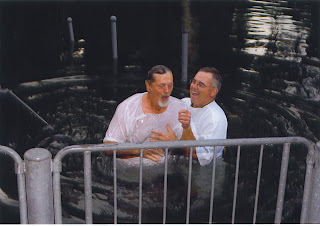 An extra special moment was when we stopped at the Jordan River where a number of our group chose to be baptized, including Bob and me. It was my privilege to baptize Bob. In turn, I was baptized by one of the other ministers in our group. It was cold, but those of us who stepped into the frigid waters would not be denied this singular experience. It was John the Baptist who baptized Jesus in these same waters. 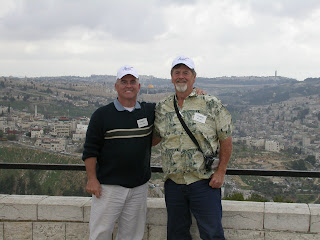 Then we drove down the Jordan Valley to Jericho where we began the three thousand foot climb to the Holy City of Jerusalem. When we stopped at a lookout point over the city, the sun was shining and you just knew there was something special about this place. Jesus, too, looked upon this city as he entered it for the final time, and said, “We are going up to Jerusalem, and the Son of Man will be betrayed to the chief priests and the teachers of the law. They will condemn him to death and will turn him over to the Gentiles to be mocked and flogged and crucified. On the third day he will be raised to life.” Hallelujah!

That’s where I’ve been the past six days. I have walked where Jesus walked. Because of this I will always have a deeper and more profound appreciation for the message of the Bible.
Posted by CHUCK ROOTS at 14:15