Picking up from last week, allow me to continue on this theme of terrorists and what they think.

I am drawing heavily on the comments of Aaron Klein, “the Jerusalem bureau chief for the right-wing news web site, and a columnist for the equally conservative Jewish Press.” This is the description of Klein by Ruthie Blum, the author of the article in the Jerusalem Post.

One of the beliefs that terrorists supposedly embrace is the idea that dying for Allah will gain them automatic entrance into paradise. Klein replied, “The suicide bombers themselves . . . absolutely believe they’re going to paradise, where they will be met by 72 dark-eyed virgins.” But Klein follows up with this observation, “What is interesting about the 72-virgin thing that recruiters [of terrorists] and would-be bombers repeat all the time is that it is not in the Koran.” He continues, “The Koran describes a paradise for martyrs as having virgins and full-breasted maidens, but the number 72 doesn’t appear. That comes later, in the Hadith [the Islamic oral tradition].”

Now, I want you to pay close attention to this next observation by Aaron Klein. He continues on the 72-virgin theme: “Once I was meeting with senior leadership of al-Aksa Martyrs’ Brigade in Nablus (a Palestinian city about forty miles north of Jerusalem), and I brought along an American radio host, Rusty Humphries. And Humphries kept pushing them to show us where the bit about 72 virgins appears in the Koran. So they began flipping through the pages, pulling out all sorts of verses that had nothing to do with 72 virgins. Ultimately they conceded that it wasn’t in there. But they didn’t like being challenged, and they told me later not to bring Humphries back there ever again.” Klein then makes a very cogent observation: “This underscores the heart of the problem – that at its very foundation there is no argument for terrorism. It’s so easy to deconstruct. But most of the media out there take the terrorists’ lying responses and move on to the next question without challenging them.” 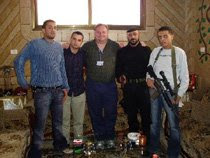 This raises an important question: How much of what you read or hear from the media do you accept, a priori, as truth?

Some in our country believe we should sit down for formal discussions with these Islamic terrorists. Klein replies to this by answering the question, “How informed are the terrorists you’ve come in contact with about American and Israeli politics?” He offers a fairly lengthy response, so allow me to present a few of his thoughts. He said, “Many are well-versed [in American and Israeli politics]. When it comes to American politics, they understand the difference between Democrats and Republicans, but they don’t know so much about the particulars of the U.S. presidential candidates. They consider all Americans as infidels, but they’re going to support whichever political party in America they believe will help them achieve their short-term goals – and the Democrats are more outspoken on withdrawing troops from Iraq. Furthermore, Barack Obama is talking about sitting down with the Iranian president, so they’d all prefer to see a Democrat win the presidential election. In fact, I did an interview in April with Ahmad Yusuf, the chief political advisor to Hamas in Gaza, in which he endorsed Obama and compared him to John F. Kennedy.”

Following this, the interviewer asks Klein, “What are you saying then – that these terrorists want to negotiate? You claim they view all Americans as infidels, yet Ahmad Yusuf compared Obama favorably to Kennedy.” “They support negotiations with the West,” Klein says, “because they see negotiations as a sign of weakness on the part of the West – as a sign that they’re bringing the West to its knees.”

Here’s the final question in the interview with Aaron Klein. “How do the terrorists envision their own society, in the event that their goals of defeating Israel and the U.S. are achieved?” Klein replies, “That’s just it. They have no plan beyond jihad.”

It is obvious that these terrorists are intent on one thing: Our death and the destruction of our nation.

You have now been educated.
Posted by CHUCK ROOTS at 12:13