There is a phrase that is very appropriate for the Marine Corps and it goes like this: “Once a Marine, Always a Marine.” This simply means that whether you did a two year hitch, or spent forty years in the Corps, you are a Marine first, last and always. This is more than a slogan – it’s a fact.

Let me give you a for instance. In a room full of people, if there are two guys who previously served as Marines, they will find each other. Don’t ask me how this happens – it’s a Marine thing. Recently, I was sitting in a restaurant waiting for a friend. There was nothing on my person that would indicate I had once served as a Marine, except for a watch on my wrist. I have always worn my watch on my right wrist with the crystal facing in. This is also a watch that has a thick rubber ridge around the crystal to protect it. On the face of the watch is the Marine Corps logo: the Eagle, Globe, and Anchor. This was not easy to see because of the way I wear the watch. Yet, a man stopped by my table and asked if I was a Marine. I assured him I was. He smiled, stood a bit straighter and informed me that not only had he previously served as a Marine, but his son is currently a Marine serving in Iraq. I shook his hand and thanked him for his service and his son’s service to our nation. This sort of encounter has happened more times than I can recall.


So a couple of weeks ago I was on a journey to San Diego from my home in northern California to join up with two men I met in Marine Corps boot camp. We three had managed to reconnect via the Internet. Joe lives in Atlanta, Georgia, and Larry lives in Dallas, Texas. We’ve been making plans to actually get together for the past year, deciding to make it for late October in conjunction with the fortieth anniversary of the day we arrived at Marine Corps Recruit Depot (MCRD), San Diego, October 27, 1969. On Sunday the 25th Joe flew to Dallas so he and Larry could fly to San Diego together. I, on the other hand, would drive down after church arriving about the same time their flight landed. I got started a bit late, so arrived after Joe and Larry were already at the house we were renting for three days. When I pulled up, these two were sitting out front, enjoying the view of the harbor while sipping a cold beverage. Joe and I have actually seen each other a couple of times over the past eight years, but neither of us had seen Larry since 1971. As I got out of the car, Larry bounded out of his chair, crossed the lawn in about four steps, leaped off the wall to the sidewalk and grabbed me in a bear hug. All I could hear him say was, “Just as the father ran to embrace the prodigal son, the least I could do is run and embrace you!” 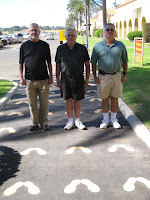 For the next three days we talked for hours, getting caught up on all that had happened in the intervening forty years. We also made a couple of visits to MCRD, retracing our steps during our boot camp training. Each of us remembered things that had happened that the others had forgotten, or the details had become fuzzy. We started out by first visiting the base chaplain’s office where we were treated like royalty. When folks heard we were getting together for our own 40th reunion of boot camp, they wanted to know more, and be of assistance in making it all the more special. We were given the loan of a petty officer who guided us through the training area, seeing to it that we didn’t wander into areas that we were not authorized to enter.

Boot camp for all Marine recruits begins by standing on the “yellow footprints.” At this moment your life changes forever! You belong to the drill instructors from this point on until your training is complete, when you have officially earned the title, “Marine.” The yellow footprints we three stood upon forty years ago were no longer there, but there were new ones in a different location. We also were able to visit the first barracks ever built on the base for recruits. We started out in Quonset Huts, but later moved into the new barracks – which are now the oldest barracks on the base!

We were invited to attend the Marine Corps Historical Society’s quarterly meeting at a breakfast at the mess hall the next morning. The new commanding general for the base, Brigadier General Ron Bailey, would be the guest speaker. As we walked through the chow line and settled down for the program, the general was walking around and introducing himself to each one who had come. He later made mention in his speech that we three were there at MCRD for our own reunion. But what really made us feel old was the fact that the general entered the Marine Corps ten years after we did! Ouch!

Among other things, we drove to Camp Pendleton for a visit to the rifle range where we each reminisced about the challenges of qualifying with the M-14 rifle. We stopped for dinner in Carlsbad at the Vera Cruz Fish House, a favorite of Isaura’s and mine. As we sat there enjoying the warmth of renewed friendships, a man at the next table overheard our conversation and acknowledged that he, too, was a former Marine. He was curious about our reunion, so we filled him in. He was waiting to meet with a client, who, when he showed up, indicated that he was a former Marine too. It was a wonderful time and a great way to end our three days together.

I couldn’t help but be amazed at the way the three of us picked up the relationship we’d once had as if those forty years were nothing. It’s as though we’d never missed a beat.

Larry still carries shrapnel in his body from his time in Vietnam. Joe and I were more fortunate. But as you remember Veterans Day today, November 11th, be sure to thank a vet for their service.

And I want to say thank you to all veterans from all branches of the service, particularly to my Marine brothers and sisters, and especially Joe and Larry.