It has been sixty-six years since the bloody battle of Iwo Jima began February 19, 1945. This particular event in World War II is one of those seminal moments that has touched my own life in a number of ways. Allow me to share what I mean.
﻿
﻿

First, my step father, Charles Garratt, served as a Marine in WWII. Interestingly, he first attempted to join the Navy. His desire was to be a pilot, but he had poor depth perception, so was rejected. So in 1943, at age 31, he enlisted in the Marine Corps. He was called “Gramps” by the 17 and 18 year olds in his platoon in boot camp. He served in aviation supply and was never involved in direct combat. That may well have changed had the U.S. not dropped the atomic bomb on the Empire of Japan, because the initial plan was for an all-out invasion of mainland Japan with the potential loss of American lives conservatively listed at between 1.5 and 2 million. Though my step father never set foot on Iwo Jima, there was certainly talk about it in our home while I was growing up in the 50s.
I was always intrigued when he shared his various experiences during his two-and-a-half years in the Corps. When my feet were large enough, I used to wear his combat boots, called “roughouts.” The soles of these boots were made to withstand the razor-sharp coral reefs which Marines were frequently required to struggle over in the process of reaching the beach on various South Pacific islands. Iwo Jima was certainly no exception.

﻿
﻿
Years later, after I had served in the Marines myself for nine years, I was back in the military, only this time as a chaplain in the Navy. I was scheduled to attend a chaplains conference in Okinawa, Japan. At the time I was the command chaplain for the USS White Plains (AFS4), home ported in Guam. Along with a handful of other chaplains, we boarded a C12, a twin-engine turboprop airplane, manufactured by Beechcraft. The flight from Guam to Okinawa required that we stop to refuel on Iwo Jima. I was thrilled, as this is virtually hallowed ground for Marines. We were only on the ground for about thirty minutes, but it gave me enough time to take some pictures, and more importantly, to embrace this bit of Marine Corps history. The number of Marines who were killed or missing on this island numbered 6,822. An additional 19,217 were wounded.
﻿
﻿ 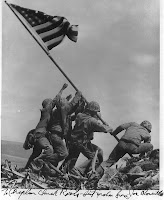 Then while serving with a reserve unit in the San Francisco Bay Area in 1999, I was invited to attend a luncheon at the Alameda Yacht Club, hosted monthly by the United States Marine Corps Combat Correspondence Association (USMCCCA), Joe Rosenthal Chapter. Who is Joe Rosenthal, you ask? Mr. Rosenthal is the gentleman who took the most famous photograph in history – the raising of the American flag on February 23rd, atop the 545 foot Mount Suribachi, on the southern tip of the island of Iwo Jima. Due to frequent ill health, the 89 year old photographer infrequently attended the luncheons. Would he be there on this day? I sure was hopeful. I can’t tell you how pleased I was to find Mr. Rosenthal in attendance that day. I was able to get a copy of the picture of the flag-raising which he then signed for me, which reads, “To: Chaplain Chuck Roots, Best Wishes! From: Joe Rosenthal”. Mr. Rosenthal passed away in 2006 at the age of 94.
﻿﻿

In May of 2010, the last surviving chaplain to have served on Imo Jima passed away. Navy Chaplain E. Gage Hotaling “joined the Chaplain Corps at age 28 in 1944 because he didn’t feel he could preach to the WWII generation unless he knew what they had endured, so he found himself with the 4th Marine Division on Iwo Jima.” Some of his experiences on Iwo Jima are included in the book, Flags of Our Fathers, which tells the stories of the men who raised the American flag on February 23, 1945. “We would have four Marines with a flag over each grave. And while they were kneeling with the flag, I would stand up and I would give the committal words for each one,” he told the filmmakers of Flags of Our Fathers. “I did it [for them] not [because they were] a Protestant, Catholic, or a Jew, but [because they were all] Marines,” the Baptist minister said. “Every man was buried as a Marine. And so I gave the same committal to each one.”

As you go about your daily activities today, take a moment to remember that sixty-six years ago today a half-dozen men (five Marines and one Navy Corpsman) raised the American flag on Iwo Jima symbolizing for the whole world that we as Americans value our freedom above all else. Three of those Marines never left the island.
Freedom always comes at a price. Thank God for those who laid down their lives so we might continue to be the “home of the free because of the brave!”
Posted by CHUCK ROOTS at 22:29