This past weekend my wife and I attended the annual California Gold Star Families conference at the Marines’ Memorial Association in San Francisco. We’ve attended this function in the past but had to miss in recent years due to health issues.


This year there were one hundred fallen military members represented. Families of these soldiers, airmen, sailors and Marines come together to set up a display of their loved one’s memorabilia and then spend the next couple of days interacting with each other in organized social events and structured group discussions. I was first invited several years ago, along with Isaura, to attend this gathering of the Gold Star Families to provide one-on-one counseling should the need arise. This allowed me to put my many years of ministry as a Navy chaplain and church pastor to good use. As a Navy wife, Isaura served as an ombudsman, helping families in the midst of crises and upheaval. In her civilian vocation she has worked with juvenile boys in a group home setting, and then later, she has been working for a foster family agency. So you can see she is accustomed to helping people deal with the pain and suffering associated with family disruption and loss.
During this weekend, we make ourselves available to these special folks by simply being there. We sit and talk at meals together, and also participate in some of the group sessions. There are several other professional caretakers serving in a similar capacity. Just this evening over dinner, there were three families at our table. One lady who was easily in her 60s, lost her son a few years ago in Iraq. Eighteen months later she lost her husband who never managed to come to grips with their son’s death. He was laid to rest alongside his son. The lady’s best friend was in attendance with her to be of support over the weekend. The family sitting next to them at dinner had become close friends, ironically, when both families were visiting the grave sites of their loved one. It was in the same cemetery literally next to each other! The connection became so strong that the father of the other lost son said he wants to be buried next to not only his son, but the son and father of the other family.

While sitting at dinner, following dessert and coffee, I felt a tap on my shoulder. I turned to face a man from the next table. Since I had been publicly introduced earlier in the evening as a retired Navy chaplain, this man decided to ask me if I knew Captain John Cruse, also a retired Navy chaplain. I assured him I most certainly did! Father John had been my commanding officer in a reserve unit on Treasure Island back in the early 90s. I asked this man if he would tell me about the son he lost. He told me how his son had been flying a reconnaissance plane when they experienced fire in the engine. Choosing not to bail out of his plane because they were over a large city, he managed to find a small acre of land to crash in, thus avoiding the loss of innocent civilian lives.

I also heard the story of a Marine Lieutenant Colonel who was the guest of honor at this event last year. Following his speech, reached under the podium, grabbed a beautifully encased American flag, walked over to a table where a mother was sitting, and presented her with the flag. Though her son, a Navy corpsman, was killed serving with the Marines in the jungles of Vietnam in 1968, she was not able to provide him with a proper military burial because of anti-war protesters. They threw rocks through her front window and harassed her so that she did not feel it was safe to have anything but a private burial. The general knelt down on a knee and spoke to her in a whisper for several minutes. When he was done, he stood up, came to attention facing her, and rendered a slow hand salute, befitting the occasion. There wasn’t a dry eye in the place!

There are so many more stories such as these, but time and space prevent me from giving you more. The folks that make this all happen are the Blue Star moms. This organization of volunteers is typically made up of women who have, or have had, a loved one serve in the military. They are tireless in their efforts to honor the Gold Star parents who carry the lasting pain of having lost a son or daughter during a time of war. 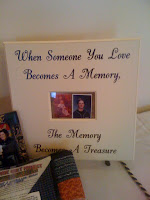 As I was walking around the display tables of the various fallen warriors, I stopped at one table because my eye caught a statement expressed in a framed photograph. This eloquent sentiment summed up for me the entire weekend: “When someone you love becomes a memory, the memory becomes a treasure.”
The Gold Star families are also a poignant reminder to all of us that our freedom comes at a high price. General George Patton once said, “It is foolish and wrong to mourn the men who died. Rather we should thank God that such men lived.”
Take a moment to thank God for these fallen men and women, and their families who have sacrificed so much.
Posted by CHUCK ROOTS at 17:46