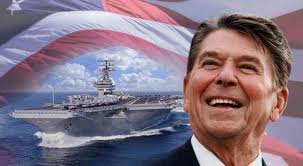 Enter – USS Ronald Reagan, CVN-76, symbolizing “Operation Tomodachi.” The Japanese selected the name Tomodachi, meaning “Friendship,” for the multi-national operation coordinated to help them dig out from the horrific destruction wrought by nature’s fury.
This massive warship, the Reagan (nicknamed “Gipper” for the former president’s role in the movie, Knute Rockne: All American) is presently sitting off the coast of Japan providing a vast array of basic life support services for the victims of the devastating 9.0 earthquake/tsunami double punch that struck this island nation late last week north of Tokyo centered in the town of Sendai. Added to this turmoil is the danger of nuclear power plants suffering destructive meltdowns. To make matters worse, an active volcanic mountain, Shinmoedake, located at the southwestern end of the island of Kyushu, is acting up, spewing rock and ash up to two-and-a-half miles into the atmosphere. The Reagan has airlift capabilities and can provide medical facilities, fresh water supplies and render other aid if needed. In fact, Reagan has distillation plants providing 400,000 gallons of fresh water from sea water daily, enough to supply 2,000 homes.

The potential loss of life for the Japanese is beyond comprehension! Ships at sea have literally been swallowed up; an entire train is unaccounted for; one village has five thousand homes under water; and one town of ten thousand people is missing! Hundreds of thousands of people are being evacuated from the center of the earthquake area; also from the areas around the nuclear power plants that have either experienced explosions, or are deemed unstable at the present time; and then there are additional tens of thousands of people being evacuated from the area around Shinmoedake.

The Japanese are known for being extremely well organized and industrious, but these unexpected circumstances will tax the most prepared of people. The infrastructure of Japan is sound in most situations. However, this is as abnormal as you could ever imagine. Even the fertile minds of Hollywood moviemakers would be hard pressed to come up with the complexities of this present tragedy.
﻿
﻿The Ronald Reagan CSG (Carrier Support Group – ships that sail in support of the carrier) is comprised of USS Ronald Reagan, the guided-missile cruiser USS Chancellorsville (CG 62), and the ships of Destroyer Squadron (DESRON) 7, which include the guided missile destroyers USS Preble (DDG 88) and USS Howard (DDG 83), and the guided missile frigate USS Thach (FFG 43). CVW-14 includes the “Black Knights” of Strike Fighter Squadron (VFA) 154, the “Argonauts” of VFA-147, the “Blue Diamonds” of VFA-146, the “Death Rattlers” of VMFA-323, the “Black Eagles” of Airborne Early Warning Squadron (VAW) 113, the “Cougars” of Tactical Electronic Warfare Squadron (VAQ) 139, the “Providers” of Carrier Logistics Support (VRC) 30, and the “Black Knights” of Helicopter Anti-Submarine Squadron (HS) 4. There are some 6,000 sailors and Marines onboard the Reagan. That’s a lot of support!

Japan is well supplied with American military and military bases. The U.S. 7th Fleet is located at Yokosuka (pronounced: Yo-koos-ka) Naval Base, also called, Commander, Fleet Activities Yokosuka (CFAY) about an hour’s drive south of Tokyo. CFAY is the largest strategically important U.S. Naval installation in the western Pacific. A short train ride west of Tokyo is Yokota Air Force Base. The host unit at Yokota is the 374th Airlift Wing and is currently used for airlift missions throughout East Asia. The 374th includes four groups: operations, mission support, maintenance and medical. Not far from Tokyo Bay is Atsugi Naval Air Facility. It is the largest United States Navy air base in the Pacific Ocean and houses the squadrons of Carrier Air Wing 5, which deploys with the aircraft carrier USS George Washington (CVN-73). And then there is Marine Corps Air Station Iwakuni. This base is detailed for Marine pilot training and air patrol, using F/A-18 Hornet fighter-attack aircraft among others in compliance with the Treaty of Mutual Cooperation and Security obligations to protect Japan. South of the four main islands of Japan is the Japanese island of Okinawa, hosting a sizable American military presence. There are nine Marine Corps bases/facilities, one Air Force, three Navy, and three Army facilities.
﻿﻿ 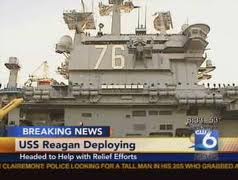 I chose to research and share this information with you because unless you have some knowledge of military operations and capabilities it might not mean anything to you to hear over the news that our military is assisting the Japanese in their time of need. I have personally been to every one of the bases located in Japan, and several of the facilities in Okinawa, not to mention spending a good deal of time on a variety of Navy ships, including aircraft carriers.
Trust me: The Japanese are in good hands!
﻿﻿﻿﻿